The Gorno-Badakhshan Autonomous Region (GBAO) or Pamir known as the Roof of the world is located in territory of the most high-mountainous area of Tajikistan. The name “Pamir” was, and still is a subject of discussions and hypotheses. One interpreted a word “Pamir” as reduction of two words “Upa Meru”, that is the country over the Meru, the divine mountain of ancient Indians mentioned in “Mahabharata”. Others have made the assumption that a word Pamir – distortion of the word “fan-mir” or “famir”, that is «the Lake country» or lake the Fan. The third consider that the word Pamir occurs from “Poi Mehr” that means the bottom of Sun. At last modern scientist consider that the word Pamir has occurred from words of ancient Iranian language: «Bumi Eri»: “bum” – a habitat and «Eri» – Arians. Knowingly many scientists consider Pamir as a mankind ancestral home. 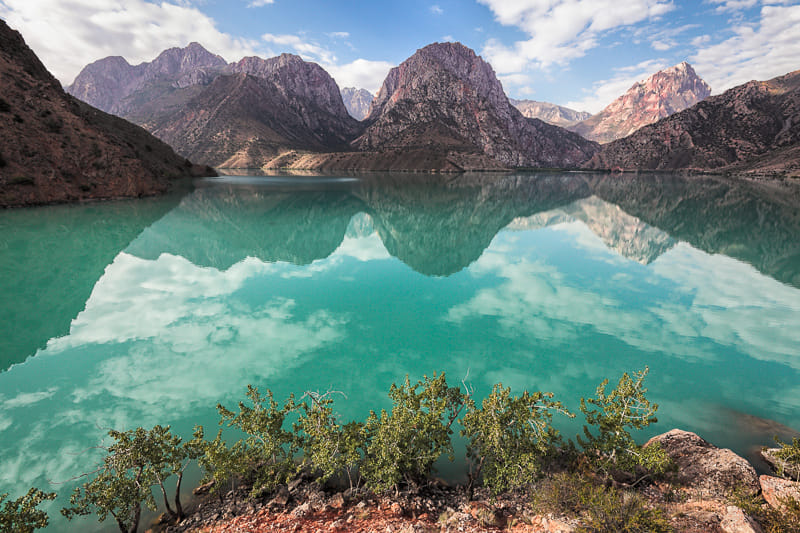 Pamir is bordering with Republic Kyrgyzstan in the north, Chinese National Republic in the east, and with Islamic Republic Afghanistan in the south and the West. Area of GBAO is 63,7 thousand sq. km. (44,5 % of territory of Tajikistan). The capital is Khorog. The area is divided to 7 administrative districts: Vanj, Ishkashim, Murghab, Roshtkala, Rushan, Shugnan, Kalaikhum where there live seven ethnic groups of Pamir. The population of Pamirs, talk on seven different languages that are sometimes not understandable to each other. It is one of riddles of Pamir. Pamiri languages are the rests of ancient East Iranian languages od Indo-European groups. In the last two centuries three languages of Pamisr have almost died out: Darvazi, Old Vanji and Sarikoli. The last fortunately remained in territory of the Chinese Pamirs. The language of interethnic dialogue are Shugnani and the Tajik languages. In territory GBAO there are 206 thousand people living, the majority of which are: Pamiri people (90,4 %) and Kirghiz. Kirghiz mainly live in Murgab area.

Historically Tajik Pamir was a part of the big Pamir which united territories of Afghani Badakhshan, Chinese Varshide (nowadays Tashkurgan) and northern territories of Pakistan-Hunza. After arrival of Russians to Badahshan, as a result «the Great Game» in 1895 by the Russian – English – Indian distribution the territory of the left river bank Pjandj was given to Afghanistan , present northern territories of Pakistan was given to India, and the right-bank Badahshan has been transferred the Russian Bukhara. On January, 2nd, 1925 in territory of right-bank Badahshan the Mountainous-Badahshan Autonomous Region was established as part of the Tadjik Soviet Socialist Republic. During existence of Soviet Union (70 years) Pamir has been closed for foreigners. Even Pamiri natives, living in other regions, had not the right to visit the historical native land without special admissions.

Pamir is the region of unprecedented contrasts and the most complicated historical, geographical and ethnographic riddles where these diversified landscapes were generated: subtropical and Alpine, eternal snow and high-mountainous deserts where valley spaces are followed by sharp tops of mountains where one can meet sets endemic flora and fauna. It is the region of unsolved secrets of the nature and people.

Pamir is the region which since the most ancient times connected Asia with other world. There was one of the most important and brisk ways of an antiquity and Middle Ages on which the trading caravans delivering the big consignment of goods followed lay across Pamir. Many cultural and economic achievements of the ancient people extended through this territory, Buddhist monks traveled to places of their worship, and at last not only lines of trading passed but also military communications.

Before acceptance of Islam ancestors of Pamir Tajiks were mainly Zoroastrians. Nowadays Pamirians profess Ismailism of Shiit, being one of directions in Islam. Tajiks of Vanj, Jazgulem, Darvaz, and also Kirghiz of Murgab area mainly are Sunni Moslems.

After Tibet, Pamir is really considered a place of pilgrimage of tourists, fans of mountains, climbers, fans of adventures and simple fans of exotic.

Monetary unit – Tajik Somoni. Dollars and euros can be exchanged in the markets and in banks of Khorog. $1=4.83 Somoni. (As of December, 1st, 2011). The dollar rate fluctuation is sometimes observed. Visa issuance terms 20-25 days and special permit for GBAO – 1 day.

Tourist’s service is connected basically with history, Ethnical attraction, religion, nature, landscape of Pamir. The main interests are high mountains of the Western Pamir and lunar landscapes of East Pamir, high-mountainous lakes, the rapid rivers and little-learned nature of Pamirs. The radonic and narzan hot springs are also attractive as well as Vakhan corridor a place of the well-known historical events, occurred in the end of ХХ centuries between Russia, Britain and India known as «Great Game».

The tourist season of Pamir lasts from May till October. But depending on environmental conditions it is also possible to visit Pamir in April and November.

We meet clients in Tajik-Kyrgyz border in Kyzyl Art, Kyrgyz China border in Sari Tash (Erkeshtam), Tajik-Uzbek borders in Oybek, Bekabad and Penjekent. Also we can meet our cities in Bishkek and Osh of Kyrgyzstan.

Graduated from Finance department of Tajik National University. Experience in Finance for more than 30 years.

Get updates on special events